How to Identify a CIA Limited Hangout Operation 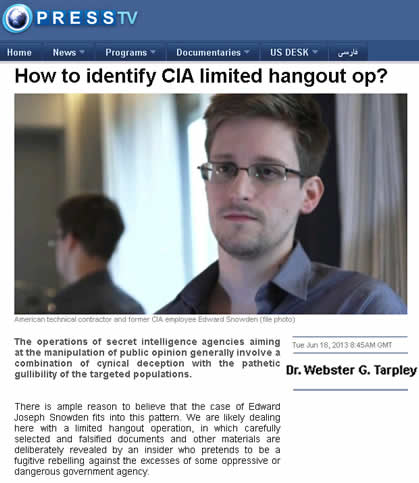 In the vintage movie Casablanca, the Vichy French official played by Claude Raines is “Shocked! Shocked!” to discover that gambling is going on in Rick’s American Bar, a notorious gambling den. He is then handed his winnings of the night, a hefty wad of banknotes. Some of the same incongruity which have made this scene so famous suffuse the limited hangout psy-op now being constructed around the dubious figure of the alleged NSA-CIA defector Ed Snowden. Mr. Snowden is presented as a reformed warmonger who in 2004 wanted to kill Iraqis in the name of freedom, but has now – presumably with some inspiration from the austerity ghoul Ron Paul, his new hero — turned over a new leaf to the point of being deeply concerned about the erosion of civil liberties in the United States.

On June 5, 2013 – the same day as the liberation of Qusayr in Syria – Snowden was the beneficiary of a high-powered media rollout assisted by the left-liberal gatekeeper Glenn Greenwald, and later by the foundation-funded documentary filmmaker Laura Poiret. This was the beginning of a series of high-profile stories featured on the front page of the London Guardian, the notorious British intelligence conduit.

And what were the revelations? First, Snowden shocked us with the news that the NSA is carrying on wiretapping of Americans and foreigners through Verizon and other companies! But of course, this was nothing but the warrantless wiretap program once called Operation Stellar Wind which had been revealed by the New York Times in December, 2005. The Obama regime even claims there is a difference in that the current wiretaps are based on warrants issued by a federal judge. In any case, nothing new.

On June 6, 2013 Greenwald and Snowden struck again, this time with a devastating power point account of PRISM, the NSA’s sweeping effort to read e-mails. Of course, more than a decade after the exposure of the Echelon snooping alliance, after the post-9/11 Authorization to Use Military Force Act, and after the Patriot Act and its implementing legislation, it was only the most naïve subjects who still assumed that their e-mails were secure. All old news.

But Greenwald and Snowden had more arrows in their scandal quiver: just before the first meeting of Obama with Chinese President Xi, Snowden revealed that the US was hacking Chinese targets! Naturally, a low level cyber war has been ongoing between Washington and Beijing since the latter part of 2009, at the latest, with mutual recriminations frequently exchanged. But this new broadside by Snowden was enough to put the Sino-American Summit under stress. A well-worn cliché.

And then, in a rousing crescendo on the eve of this year’s G-8 conference in Northern Ireland, Greenwald and Snowden flabbergasted world public opinion by revealing that the British GCHQ of Cheltenham, working together with the NSA, had access to phone calls and e-mails of world leaders attending the G-20 conference in Britain in 2009! Self-evident.

Apart from a few obvious exaggerations and rhetorical flourishes, Greenwald and Snowden had thus managed to add virtually nothing to our awareness of institutionalized electronic eavesdropping. But the media circus they helped to create emerges in a sinister light when we realize that it was offered as a diversion of world public opinion from the really urgent question on the world historical agenda: would the British, the French, the Israelis, and the neocons be able to push the reluctant and vacillating Obama into the thankless role of leading a token NATO coalition in an attack on Syria, Hezbollah, and perhaps Iran? The suspicions grew stronger in the light of the media follow-up, which betrayed the clear intent of weakening Obama with a view to softening him up and diminishing his ability to resist the demands for immediate all-out aggression being issued by the forces just named. As a result, the antiwar forces who might have devoted their energies to counterattacking the British, French, Israeli, neocon, and militarist warmongers were instead primarily focused on attacking Obama – in effect, driving him into the arms of the aggressor faction. It was a market of dupes in grand style.

The operations of secret intelligence agencies aiming at the manipulation of public opinion generally involve a combination of cynical deception with the pathetic gullibility of the targeted populations.

There is ample reason to believe that the case of Edward Joseph Snowden fits into this pattern. We are likely dealing here with a limited hangout operation, in which carefully selected and falsified documents and other materials are deliberately revealed by an insider who pretends to be a fugitive rebelling against the excesses of some oppressive or dangerous government agency.

But the revelations turn out to have been prepared with a view to shaping the public consciousness in a way which is advantageous to the intelligence agency involved. At the same time, gullible young people can be duped into supporting a personality cult of the leaker, more commonly referred to as a “whistleblower.” A further variation on the theme can be the attempt of the sponsoring intelligence agency to introduce their chosen conduit, now posing as a defector, into the intelligence apparatus of a targeted foreign government. In this case, the leaker or whistleblower attains the status of a triple agent.


Continue Reading Exclusively at PressTV »
Posted by Admin at 5:31 AM