London Bashes Obama with Scandals to Extort a US Attack on Syria, Save Death Squads; Petraeus at Bilderberg Prepares Regime Change in US 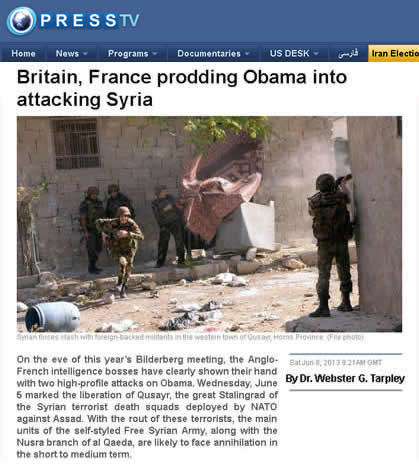 On the eve of this year’s Bilderberg meeting, the Anglo-French intelligence bosses have clearly shown their hand with two high-profile attacks on Obama. Wednesday, June 5 marked the liberation of Qusayr, the great Stalingrad of the Syrian terrorist death squads deployed by NATO against Assad. With the rout of these terrorists, the main units of the self-styled Free Syrian Army, along with the Nusra branch of al Qaeda, are likely to face annihilation in the short to medium term.

On the same day that Qusayr fell, the British and French governments hysterically demanded that Obama undertake a total bombing campaign against Syria, whatever the consequences in regard to Russia and other powers. To his credit, Obama is continuing to say no to this lunatic Anglo-French neocolonial adventure. On that same June 5, the London-based daily The Guardian, in an article by the expatriate American Glenn Greenwald, hyped a court order from the secret FISA panel of federal judges showing that the US National Security Agency was routinely monitoring the telephone records (including time, locations, call duration, and unique identifiers, but not the contents of the conversations) of possibly unlimited millions of Verizon phone subscribers. Back in the US, reactionary talk show hosts began screaming “Obama taps your phones!”

On June 6, again in advance of every other newspaper in the world, The Guardian published another article by Glenn Greenwald and Ewen MacAskill revealing that the National Security Agency, under a program called Prism, had obtained direct access to the servers of Google, Facebook, Yahoo, Apple, Youtube, Skype, AOL, and Microsoft, and was busily monitoring the content of e-mails, file transfers, and live conversations. Back in the US, reactionary talk show hosts began screaming, “Obama reads your e-mail!”

Under George Bush, warrantless wiretaps and similar illegal programs were revealed by various media organs. These revelations had minimal impact on Bush, whose base was indifferent to civil liberties. Obama’s base, by contrast, cares very much, and has been visibly upset by these new reports. While strongly condemning these totalitarian programs, we must also not lose sight of who is putting these reports into circulation, and why. Phone taps are bad, but a general war in the Middle East leading to a possible Third World War is far worse.
Continue Reading Exclusively at PressTV »
Posted by Admin at 5:33 AM