Treasonous Spying: Shoot the Messenger, Not the Monitor

Is he who watches the watchers a hero or villain? A traitor or whistleblower? And do the watched even take notice? 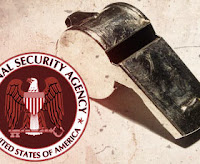 Together they reveal a program of massive, wholesale surveillance by the NSA of American’s Internet activities on every major platform available.

Instead of focusing on the fact that warrantless wiretaps have continued since shortly after September 11 (if not prior to 9/11), as well as through web communications since (at a minimum) 2007, the story has been centered around the “treason” committed by Snowden, who the mainstream media has been quick to point out again and again is a mere high school dropout (although that didn’t stop the NSA from paying him $200,000 a year as an NSA contractor).