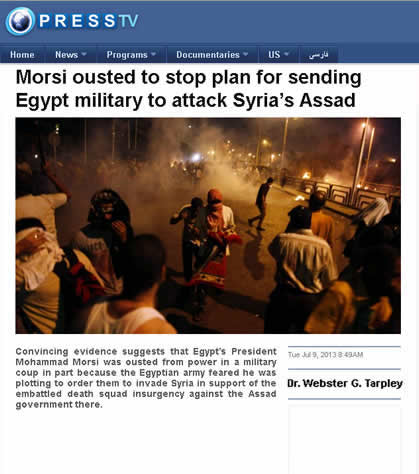 Convincing evidence suggests that Egypt’s President Mohammad Morsi was ousted from power in a military coup in part because the Egyptian army feared he was plotting to order them to invade Syria in support of the embattled death squad insurgency against the Assad government there.

The combination of Morsi’s aggressive designs against Syria, together with some trial balloons from presidential circles about a possible conflict with Ethiopia, plus the massive anti-Morsi demonstrations organized by the National Salvation Front and the Tamarod movement, convinced military leaders that the incompetent and erratic Morsi, who had destroyed his own popularity by selling out to the demands of the International Monetary Fund last November, represented an intolerable risk for Egypt.

According to the Washington Post, the dissatisfaction of the Egyptian military with Morsi “peaked in June, when Morsi stood by twice as officials around him called for Egyptian aggression against Ethiopia and Syria, threatening to suck Egypt into conflicts that it could ill afford, former military officials said.” (Michael Birnbaum, “Protests Were the Catalyst for Military’s Move against Morsi,” Washington Post, July 6, 2013)
Morsi’s call for Holy War against Assad came just three days after US Secretary of State John Kerry, at a meeting of the Principals’ Committee of the US Government, tried to ram through an immediate bombing campaign against Damascus, but had to settle for the option of arming the Syrian terrorist opposition, leading many observers to conclude that the Egyptian president was acting as part of a US anti-Syrian strategy.

The beginning of the end for Egypt’s first elected president came in mid-June, when he attended a militant Islamist conference “in support of the Syrian uprising” at a 20,000-seat indoor stadium in Cairo. As the packed hall chanted and applauded deliriously, Morsi announced: “We have decided to close down the Syrian Embassy in Cairo. The Egyptian envoy in Damascus will also be withdrawn. The people of Egypt and its army will not leave Syrians until their rights are granted and the new elected leadership is chosen.” (Al Ahram online, June 15, 2013)

By thus breaking off diplomatic relations with another Arab state, Morsi was joining the dubious company of the NATO-backed puppet regimes in Libya and Tunisia, the only Arabs so far to have called home their envoys from Damascus. And for Cairo, such a move has far greater significance, given that Egypt and Syria were politically united between 1958 and 1961 in a single nation as the United Arab Republic, one of the fruits of President Nasser’s Pan-Arab Socialism.


Continue Reading Exclusively at PressTV »
Posted by Admin at 10:41 AM