9/11: Thy Shall Not Bear False Witness

Thou shalt not bear false witness against thy neighbor. Exodus 20:16 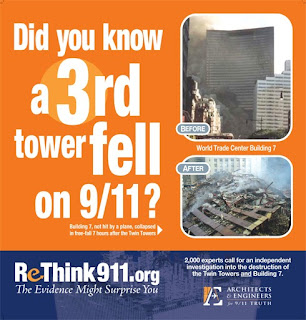 Action Alert: If you would like to take a stand for 9/11 Truth, please visit http://rethink911.org/ and donate before August 11th. ReThink911 is sponsored by a coalition of more than 40 organizations and has raised over $210,000 for a massive truth campaign to reach tens of millions of people in 11 major U.S. cities this September. The campaign includes a 50 foot billboard in Times Square, subway ads, taxi cab ads, freeway billboards and more.

The false-flag democide attacks of September 11, 2001, were designed to justify a one world government under the guise of fighting the War on Terror while at the same time transforming relatively free societies into police states beyond that imagined by George Orwell.

Absent 9/11, the undeclared wars in Iraq, Afghanistan, and Pakistan would not have been possible. The Western invasion and covert overthrowing of several governments known as the Arab Spring could not have happened. And U.S. citizens would not be enslaved by unconstitutional programs like PRISM and XKeyscore, or subject to indefinite detention without due process under the NDAA, or targeted as domestic extremists for assassination.

Unfortunately, Sixty-eight (68%) of Americans and Brits not only refuse to examine the 9/11 evidence, thereby accepting absurd official story, but in doing so, they abysmally fail the moral and spiritual test of 9/11 by bearing false witness against their Iraqi, Afghani, Pakistani, and other neighbors. By denying truth and the voice of their conscience, they deny justice to thousands of slain innocents while subjecting themselves and everyone else to the chains of perpetual slavery.