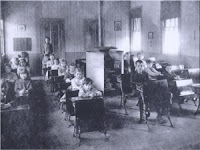 Have you ever seen the movie Idiocracy?  It is a movie about an “average American” that wakes up 500 years in the future only to discover that he is the most intelligent person by far in the “dumbed down” society that is surrounding him.

Unfortunately, that film is a very accurate metaphor for what has happened to American society today.  We have become so “dumbed down” that we don’t even realize what has happened to us.  But once in a while something comes along that reminds us of how far we have fallen.

In Kentucky, an eighth grade exam from 1912 was recently donated to the Bullitt County History Museum.  When I read this exam over, I was shocked at how difficult it was.  Could most eighth grade students pass such an exam today?  Of course not.  In fact, I don’t even think that I could pass it.  Sadly, this is even more evidence of “the deliberate dumbing down of America” that former Department of Education official Charlotte Iserbyt is constantly warning us about.

The American people are not nearly as mentally sharp as they once were, and with each passing generation it gets even worse. Just check out some of the questions from the eighth grade exam that was discovered.  Do you think that you could correctly answer these?…