Obama to Fill Prisons with File Sharers Instead of Pot Smokers?

The most ridiculous provisions of the defeated SOPA are put back on the table. Obama Administration wants online streaming to be a felony. 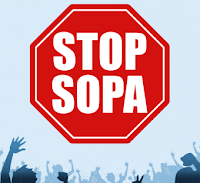 As a pro-marijuana activist, it's a joy to watch the Berlin Weed Wall come tumbling down. I even found some pleasure this week in Attorney General Eric Holder's announcement for reduced sentencing for non-violent drug offenders.

It's not everyday some liberty is yielded back to the people, however small.  Yet my joy is tempered by cynicism.

The private prison-industrial complex could not have been happy with Holder's recent announcement, but there's a strange silence. There's not a single bought-and-paid-for politician coming to the defense of longer prison terms for non-violent drug offenders. So what gives?

Surely there must be intense lobbying efforts underway to stop this.  I mean, any industry evil enough to bribe judges to throw innocent children in cages would clearly scratch and claw for every dollar of potential profit, right?