Reuters: US to Strike Syria Before UN Evidence Collected 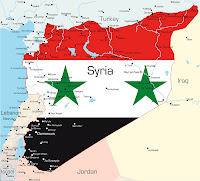 The US has accused the Syrian government of delaying UN inspectors from accessing the site of an alleged chemical weapons attack in Damascus. But now, according to Reuters, the US appears to be preparing to strike Syria militarily before the UN's now ongoing investigation is concluded and evidence revealed to either support or conflict with the West's so far baseless allegations.


Western powers told the Syrian opposition to expect a strike against President Bashar al-Assad's forces within days, according to sources who attended a meeting between envoys and the Syrian National Coalition in Istanbul.

"The opposition was told in clear terms that action to deter further use of chemical weapons by the Assad regime could come as early as in the next few days, and that they should still prepare for peace talks at Geneva," one of the sources who was at the meeting on Monday told Reuters.

Clearly, such a strike would render moot both the UN inspection team's investigation and any evidence they may find.