The Game Changer: Syria Will Strike Israel Should U.S. Attack 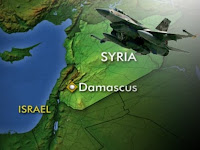 Syria is guilty of war crimes. According to the U.S., Israel and other Western nations, it was Syrian President Bashar al-Assad who was behind the chemical attack that left hundreds dead last week.

All signs point to armed intervention in Syria this week, even though UN inspectors (who incidentally came under sniper fire today) have yet to conclude their investigation.

No matter, however. The die has been cast. There is a strong possibility that the Allies will respond, in force, in very short order.