Why Have Police In America Turned Into Such Ruthless Thugs? 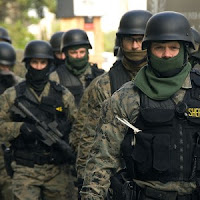 Once upon a time, the police were one of the most respected institutions in America, but now most Americans fear them.  Almost every single day there are multiple stories of police brutality or misconduct that make the national news.

Why are police acting like this?  Why have police in America turned into such ruthless thugs?  In the case of the baby deer that was killed, 13 armed agents stormed the animal shelter up in Wisconsin where it was being cared for.  Is this really the kind of country that we want our children to grow up in?  A country where Bambi is hunted down by armed thugs working for the government?
Read more »
Posted by Admin at 6:55 AM