Biometrics: Taking a Bite out of Apple 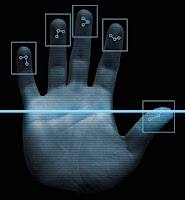 The wireless age has grown leaps and bounds since the turn of the new millennium. From big square cellphones, to flip phones, to the new touch screen phones that can access the Internet wherever service is available. However, communications just went 'Back to the Future'; 1984 to be exact, and was secretly given over to Big Brother.

Apple's new iPhone 5s will come in many colors, and with a brand new feature; Touch ID. Touch ID uses biometrics technology so users can scan their fingerprints to better lock their phones, and make purchases in Apple stores. For most, this seemingly harmless feature is just that; harmless. But for privacy advocates, and those who understand the direction we are heading in, our biggest fears were realized.

In the digital age, wireless technology, and biometrics are increasingly becoming one. It should be no surprise that Apple was the first to get their hands on the biometrics technology and incorporate it into its new phone.