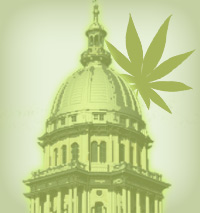 A bill that would legalize the possession of small amounts of marijuana for adults over 21 and set up a system of regulated marijuana commerce was introduced in the District of Columbia city council Tuesday. Filed by Councilmember David Grosso (I-At Large), the bill would give regulatory authority to the DC Alcoholic Beverages Regulation Administration.

The bill comes on the heels of a decriminalization bill introduced in July by Councilmember Tommy Wells (D-Ward Six). That bill would eliminate criminal penalties for the possession of up to an ounce of weed by adults and replace them with a maximum $100 fine.

The proposals appear to reflect public opinion in the nation's capital. An April Public Policy Polling survey that found 75% of District voters support decriminalization and more than 60% would support a tax, regulate, and legalize initiative similar to those that passed in Colorado and Washington last year. The same poll found a solid majority (54%) in favor of decriminalizing the possession of all drugs.