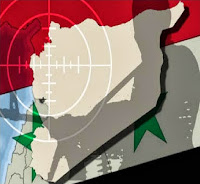 
Lie 1. Chemical weapons were delivered with munitions not used by rebels: This claim includes referencing "Syria watcher" Eliot Higgins also known as "Brown Moses," a UK-based armchair observer of the Syrian crisis who has been documenting weapons used throughout the conflict on his blog.

While Higgins explains these particularly larger diameter rockets (140mm and 330mm) have not been seen (by him) in the hands of terrorists operating within and along Syria's borders, older posts of his show rockets similar in construction and operation, but smaller, most certainly in the hands of the militants.

The Washington Post contends that somehow these larger rockets require "technology" the militants have no access to. This is categorically false. A rocket is launched from a simple tube, and the only additional technology terrorists may have required for the larger rockets would have been a truck to mount them on. For an armed front fielding stolen tanks, finding trucks to mount large metal tubes upon would seem a rather elementary task - especially to carry out a staged attack that would justify foreign intervention and salvage their faltering offensive.

Video has now emerged showing just the sort of unmarked improvised trucks US-backed terrorists would use to carry out the attacks, surrounded by a combination of civilian-dressed and semi-uniformed individuals firing ordnance identical to those used during the Damascus chemical weapons attack. Western media sources are scrambling to explain how this is instead, the "smoking gun" proving the Syrian government was behind the attacks, and not the so-called "rebels."