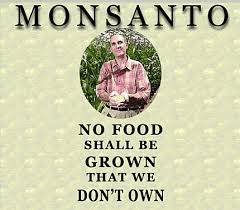 Petition Going for One Million Signatures

Monsanto isn't satisfied with just selling us herbicides and pesticides for coating our crops. Now they're using a European legal loophole to patent away varieties of cucumber, broccoli, melons and conventional ways of breeding fruits and veggies abroad -- forcing growers to pay them for the very seeds they're planting!

Don't let Monsanto keep buying up Mother Earth. If we can reach out to countries like Germany, France and the Netherlands where opposition to Monsanto is growing, we can force a vote among the state of the European Patent Convention to stop the biotech giant in its tracks.

We have a chance to stop Monsanto from setting a dangerous precedent and help fix the European patent laws for good. Will you join us?

PETITION TO EPC MEMBER STATES: We urge you to call on the EPO Administrative Council to close the loopholes that allow corporations like Monsanto to patent plants and conventional breeding methods today. http://act.watchdog.net/petitions/2739?n=35177222.oLWY-9