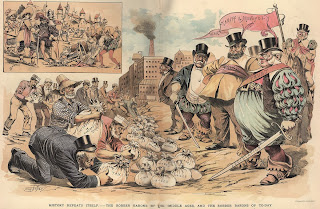 In a dramatic and highly unexpected move, the Federal Reserve has revealed that it is bored of merely being described as "committing highway robbery," and now will actually, "seek opportunities to commit it."

The current Reserve Chairman, Ben Bernanke, purchased a ski-mask early yesterday, and later quipped, "I already have an arsenal of weapons. Really, if we didn't own the Federal Government, I'd be on a watch list, for sure."

A recent victim recounted her horrifying ordeal: "While at a stoplight, two lavender Rolls Royce's sandwiched me, before I could react. Next, four sumptuously dressed older gentleman with antique muskets surrounded my mini-cooper. I could tell right away they were not from around here. One of the men said, 'Give us all your gold and diamond trinkets, right now, we're late for fox hunting.' When I explained all I had was fifty cents, they didn't seem to understand. One of the men handed me his business card, and said, 'Don't take it personal, dearie, it's just business,' before discharging his musket into the cold night air. It was terrifying!"

Later, at the Kennebunkport Country Club, FNN caught up with the marauders, as they were sipping sherry on the veranda. When asked why the sudden shift in Reserve policy, the Chair stated, "Robber barons used to be much more authentic. We feel like such phonies, only robbing in an abstract manner. I've been reading Catcher in the Rye. It's changed my life."

Bernanke is now scheduled to appear on Oprah, who always asks the tough questions.