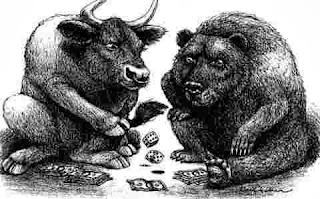 A spokesman for the Dow Jones Average has indicated that it may not be a good indicator of economic strength, after all. "To generate the number, first, we get a bunch of monkeys into a room; then, we play a game called 'Monkey Shuffle,' which corresponds to a complex algorithm, depending upon various monkey dances. This is how we get the Dow Jones."

A senior White House economist mused, "Throughout the ages, gold has been the transactional epicenter of human economic activity. Now we have monkeys aping gold, and gold's devolving. You can't make this stuff up!"

Disgruntled investors are asking the question: "If the Dow Jones no longer works, how can we re-create the "Monkey Shuffle?"

NASDAQ analysts were quick to step up and answer questions concerning their method, stating, "Our indicator is based upon the most genuine fabrications possible. As soon as the goose is cooked, we serve it up to you."

But this has only caused more confusion among investors, leading them to wonder, "First monkeys, and now geese? What will they tell us next, that money isn't real?"

A congressional panel may or may not convene Monday, depending on "exclusive T-times." But a Congressional spokesman cast some light on the situation, saying, "The thing about money is, we just have so damn much of it! Hey. Would you like to see my money tree?"