What Can You Do to Stop NSA Spying? 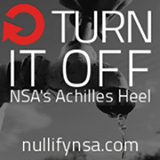 Rosa Parks faced what likely seemed a hopeless situation at the time.

Majority opinion, backed by the strong arm of government, relegated her to second-class citizenship. In that day, who imagined it would ever change?

Parks was riding the Cleveland Avenue bus home from work in Montgomery, Alabama on Dec. 1, 1955, when the white only seats in the front filled with passengers. Bus driver James Blake moved the “colored” section sign behind the row Parks was sitting in and demanded that she move to seats in the rear of the bus to accommodate the white riders.

“People always say that I didn’t give up my seat because I was tired, but that isn’t true. I was not tired physically, or no more tired than I usually was at the end of a working day. I was not old, although some people have an image of me as being old then. I was forty-two. No, the only tired I was, was tired of giving in,” she wrote in her autobiography.

Parks’ actions that day sparked the Montgomery bus boycott and ignited the civil rights movement. Ultimately, Jim Crow died because one woman grew tired of giving in and had the guts to say, “No.”

Today, we also face a seemingly hopeless situation with our own government relentlessly spying on us.