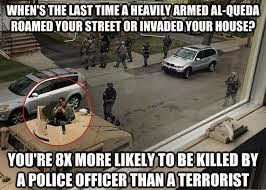 Many people have noticed that several of the local police officers, particularly the younger ones are more gruff, rude and even abusive as compared to the past. Many veteran officers attribute the shift towards DHS’ training of local police which focuses on teaching the police that the public is their enemy as opposed to the traditional view that teaches that the local population and the police are partners in keeping the community safe.

Whatever happened to the friendly neighborhood cop who walked a beat, was well-known and respected by the local residents and was seen as the protector of the neighborhood? Far too often, that cop has been replaced by thugs wearing camouflage, bank robber type black ski masks who are armed with automatic weapons and sometimes even break down the doors of people who are innocent.