New HPV Vaccines on the Horizon 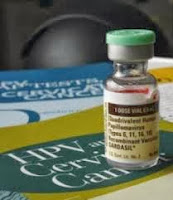 HPV, the human papillomavirus, is a relatively newer health scare that has been bandied around as causing cervical cancer since 2006-08 in order to get adolescent girls to accept willingly Merck & Company’s HPV vaccine Gardasil® along with its advertising campaign, “One less girl.” [1]

However, according to the U.S. Centers for Disease Control and Prevention (CDC),

Other things can increase your risk of cervical cancer—

Having HIV (the virus that causes AIDS) or another condition that makes it hard for your body to fight off health problems.

Using birth control pills for a long time (five or more years). [something not stressed]

Having given birth to three or more children.

Keeping in mind the “One less girl” campaign, what were the HPV vaccination rates for girls in the United States, especially since the HPV vaccine was supposed to provide protection from cancer?
Read more »
Posted by Admin at 3:00 PM