Right Wing’s Surge in Europe Has the Establishment Rattled 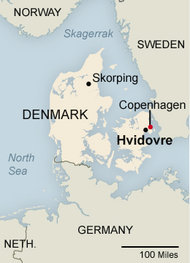 HVIDOVRE, Denmark — As right-wing populists surge across Europe, rattling established political parties with their hostility toward immigration, austerity and the European Union, Mikkel Dencker of the Danish People’s Party has found yet another cause to stir public anger: pork meatballs missing from kindergartens.


A member of Denmark’s Parliament and, he hopes, mayor of this commuter-belt town west of Copenhagen, Mr. Dencker is furious that some day care centers have removed meatballs, a staple of traditional Danish cuisine, from their cafeterias in deference to Islamic dietary rules. No matter that only a handful of kindergartens have actually done so. The missing meatballs, he said, are an example of how “Denmark is losing its identity” under pressure from outsiders.

The issue has become a headache for Mayor Helle Adelborg, whose center-left Social Democratic Party has controlled the town council since the 1920s but now faces an uphill struggle before municipal elections on Nov. 19. “It is very easy to exploit such themes to get votes,” she said. “They take a lot of votes from my party. It is unfair.”
It is also Europe’s new reality. All over, established political forces are losing ground to politicians whom they scorn as fear-mongering populists. In France, according to a recent opinion poll, the far-right National Front has become the country’s most popular party. In other countries — Austria, Britain, Bulgaria, the Czech Republic, Finland and the Netherlands — disruptive upstart groups are on a roll.
Read More
Posted by Admin at 5:09 PM