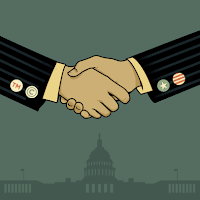 The newest round of Trans-Pacific Partnership (TPP) negotiations begin today in Salt Lake City, Utah, where trade representatives will work towards finalizing the text of this sprawling secret agreement. Last week's publication of the controversial "Intellectual Property" chapter by Wikileaks confirmed our worst fears: the TPP carries draconian copyright enforcement provisions that threaten users' rights and could stifle innovation well into the 21st Century. Public opposition to the TPP continues to grow as a result of the leaked document; an opaque policymaking process that seems geared towards appeasing Big Content does not provide much in the way of legitimacy.

In the past week, 23 Republicans and 151 Democrats in the House of Representatives wrote letters to the Obama administration indicating their unwillingness to comply with the Executive's request for power to fast-track trade agreements through Congress. Fast-trackauthority, also known as Trade Promotion Authority, limits congressional approval over trade agreements to a yes or no, up or down vote. If a bill granting fast-track were to pass, hearings would become extremely limited, and lawmakers would have no ability to make amendments. It would give the Obama administration unchecked power to shape TPP and other agreements like the EU-U.S. trade deal, the Transatlantic Trade and Investment Partnership (T-TIP).