The Rise of the Tax Wall Street Party 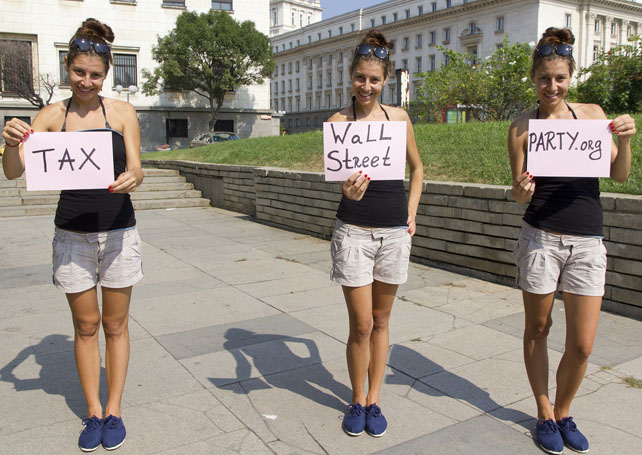 
The Government should create, issue, and circulate all the currency and credits needed to satisfy the spending power of the Government and the buying power of consumers. By the adoption of these principles, the taxpayers will be saved immense sums of interest. Money will cease to be master and become the servant of humanity. -Abraham  Lincoln

The Tax Wall Street Party (www.TaxWallStreetParty.org) presently has one candidate in the New York mayoral campaign: Randy Credico. His platform is to tax Wall Street 0.5% and spend money on social programs and infrastructure. He also wants to end the New York City stop-and-frisk program. Nationally, the Tax Wall Street Party has the platform of a 1% sales tax on all stocks, bonds and derivative transactions, protective tariffs, re-establishing the Glass-Steagall provisions, nationalizing the Federal Reserve, and investing in infrastructure programs and, most importantly, a jobs program.  In this way they are a New Deal party.

The recent congressional circus involving the government shutdown that ended one day before the debt ceiling was due to expire, was a blatant dysfunction of Congress. Enforcing the debt ceiling would certainly be forced austerity and would cause a crisis for holders of US Treasury bonds as well as affecting the confidence of investors. What is a solution to this crisis and dysfunction?

I will share with you my eulogy for the Republican Party. The GOP died because of their ‘brilliance’ at tactics: “Let’s force defunding of the current enacted healthcare system by so obviously bluffing.” Idiots! Unfortunately, that’s what most of the world said too. The Republican Party started as the party of Lincoln of the 1860s; they died the party of Douglas. They were a nation builder, now they sympathise with a low wage economy ... How can a nation—let alone the most impactful economy in an interconnected globalized world—sustain itself that way?

This is why we have the timely emergence of the Tax Wall Street Party. Their ideas are an emerging movement to reinforce and in fact better the standard of living for all Americans who have the desire to become educated and be able to work in jobs that provide a living wage. This is not a recycled “rob the rich” strategy. These platform ideas have been adopted in the past by FDR and others in the world at times of comparable economic upheaval. Therefore, we know these are legitimate experiments that worked.


Perhaps taxes could be regarded as robbing. But the bankers caused this mess; they should now help clean it up! In fact, some should go to jail. A 1% sales tax on all stocks, bonds and derivative transactions seems reasonable because the economy is not just for them; it's the foundational fabric of society. In fact, the Greek root of the word economy, oikonomios, literally means house or home (oikos) and careful management for thriving.  America needs to thrive and prosper again, and taxing Wall Street can be the first step toward reaching that goal!