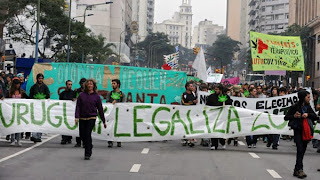 We're not just talking about "decriminalizing" it, or allowing recreational use while still prosecuting pot's cultivation and selling. The government will still limit amounts to six plants per home per year. And as with alcohol purchases in the US, selling pot in Uruguay will require a license.

In typical government meddling fashion, allowing personal use but not production and sale made a mockery of sense. Speaking of mockeries of sense, the usual arguments about marijuana being a "gateway" drug were out in force among the drug warriors. Colorado Senator Alfredo Solari, whose state is set to alllow its first legal weed sales in just a few days, said, "Competing with drug traffickers by offering marijuana at a lower price will just increase the market for a drug that has negative effects on public health."