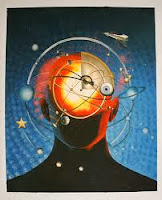 Tech behemoths Google and Microsoft have jumped into augmented reality full force. The principles behind first-person, human-computer interface systems have been around for many decades in combat zones throughout the world in the military Heads Up Display system (HUD). What began pre-WWII for fighter pilots, has found its way into the consumer market through video games, vehicles, and info-glasses. Contact lenses are also in development by the Department of Defense through a system called iOptik - which is projected to be available to consumers in 2014.

The military origins of nearly all high tech systems that trickle down to the consumer is a standard part of the military industrial complex. Therefore, it makes perfect sense that a new competitor to Google in the augmented reality field is Meta - a company being chaired by Meron Gribetz, an Israel Defense Forces veteran.  The company seeks to take the Google Glass concept one step further by incorporating the world's first holographic wearable interface.