Making A Killing With Cancer: A $124.6 Billion Industry 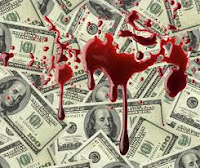 If you had a business selling something that made you well over a hundred billion dollars per year, would you take steps to eradicate the need for your business? Or would you make every effort for that money continue rolling in?

Take cancer, for example. Don’t let all the media hype about “The Cure” fool you. No one who is in a position to do so wants to end cancer because they are all making a killing on the big business of treatment, while ordinary people go broke, suffer horribly, and die.

There will never be a “cure” brought to market because there just isn’t enough profit in eradicating the disease entirely. There will never be a governing body that protects consumers from being subjected to known carcinogens, because that, too, will stop the cash from rolling in. A great deal of research is covered up and many potential cures are ignored and discredited because there is far more money in perpetuating illness than in curing it. In 2012, the reported spending on cancer treatment was 124.6 billion dollars. Blood money.