December 10, 2013 - Pulitzer Prize-winning journalist Seymour Hersh, who had warned as early as 2007 of US-Israeli-Saudi plans to use Al Qaeda as proxies to overthrow the Syrian government, has published another groundbreaking report titled, "Whose Sarin?" In it, Hersh states (emphasis added): 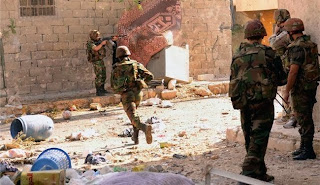 Barack Obama did not tell the whole story this autumn when he tried to make the case that Bashar al-Assad was responsible for the chemical weapons attack near Damascus on 21 August. In some instances, he omitted important intelligence, and in others he presented assumptions as facts. Most significant, he failed to acknowledge something known to the US intelligence community: that the Syrian army is not the only party in the country’s civil war with access to sarin, the nerve agent that a UN study concluded – without assessing responsibility – had been used in the rocket attack. In the months before the attack, the American intelligence agencies produced a series of highly classified reports, culminating in a formal Operations Order – a planning document that precedes a ground invasion – citing evidence that the al-Nusra Front, a jihadi group affiliated with al-Qaida, had mastered the mechanics of creating sarin and was capable of manufacturing it in quantity. When the attack occurred al-Nusra should have been a suspect, but the administration cherry-picked intelligence to justify a strike against Assad.

The lengthy report goes on in detail, covering the manner in which Western leaders intentionally manipulated or even outright fabricated intelligence to justify military intervention in Syria - eerily similar to the lies told to justify the invasion and occupation of Iraq, and the escalation of the war in Vietnam after the Gulf of Tonkin incident.