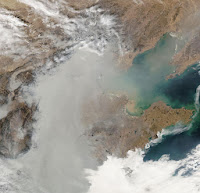 Not surprisingly, China is home to some of the worst pollution on the planet. We’re talking rivers-flowing-red levels of pollution visible from space. The air in the world’s largest carbon emitter has gotten so dirty and polluted at this point, that the country has officially demanded that “foreign embassies” (meaning the U.S. basically) stop giving out data on just how horribly polluted the nation’s cities truly are.

Now an incessant, poisonous smog has settled over northeast China for long enough to actually cause people to get concerned (above and beyond the regular levels of perpetual concern). It’s being referred to as an ‘airpocalypse’. Everything from expressways and bridges have been shut down. Children have stayed home from school for seven days now. Shanghai’s air quality index has officially hit record pollution severity and red-level warnings — the most dire warning there is — have been issued to residents.