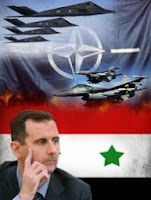 In yet another strategic victory by the Syrian military, it was announced on December 8 by the Syrian Ministry of Defense and the General Staff that the Syrian Arab Army has liberated the town of Al-Nabk, a smaller town which is situated on the edge of the Damascus-Homs Highway. According to these announcements Al-Nabk is now largely free and clear of death squad forces.

The victory in Al-Nabk comes as a result of a series of special operations conducted by the Syrian military. Syrian Perspective reports that travel between Damascus and Homs without fear of being attacked by death squad members is now possible for the first time since the foreign-backed jihadists seized the area.

Al-Nabk is an important strategic victory because, not only does it allow reinforcements to be sent toward outer villages like Maaloula, Yabroud (where operations are now taking place), and Saydnaaya, but it also allows for the complete interlocking of supplies and reinforcements between Damascus and Homs. Such resupply and reinforcements can then be used to free the highway from Homs to Aleppo and initiate the liberation of the largest city in Syria.

Unfortunately, a disinformation campaign against the Assad government is already underway regarding the violence which took place in Al-Nabk.