Taking their cue from US-backed pro-EU protesters in Ukraine, anti-regime protesters in Thailand have mobilized their own bulldozers to remove barriers. Unlike in Ukraine, where despite the West calling the police crackdown "violent," they did not shoot protesters operating bulldozers near their lines. 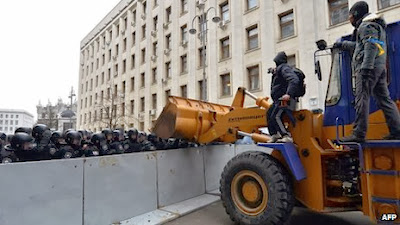 Image: Protesters in Ukraine, backed by the US, UK, and EU, have used earthmovers against police barriers in the capital city of Kiev. Ukrainian police did not use live fire on the protesters, and protesters have been allowed to storm government buildings. What little force the police have used has been utterly condemned by the West.

In stark contrast, the embattled US-backed regime in Bangkok, Thailand has insisted it will shoot-to-kill any drivers attempting to remove barriers (not attack police) to gain entrance into the last of several buildings left unoccupied by protesters.

Several vehicles have been mobilized by protesters near Metro Police Headquarters and Government House after protesters weathered CS tear gas, OC pepper powder, rubber bullets, and fire hoses all day as they worked police back through several rings of barriers already. Many were taken down by hand, using rope and manpower.