February 11th: The Day We Fight Back Against NSA Surveillance 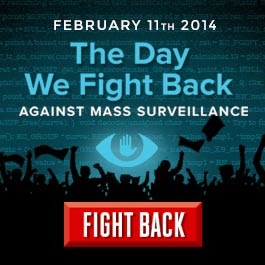 In January 2012, the Internet rose up to protest and defeat SOPA, legislation that sought to censor the Internet in the name of copyright enforcement.

And in January of last year, we lost a dear friend and fierce digital rights advocate, Aaron Swartz. We vowed to defend the rights of Internet users everywhere in his memory.

Now we have a new challenge: ending mass surveillance by the NSA.