The “Inflammatory Rhetoric” the State Department and Its Puppet Ban-Ki Moon Don’t Want the World to Hear: The Landmark Address of Syrian Foreign Minister Walid Moallem to the Geneva 2 Conference, January 22, 2014 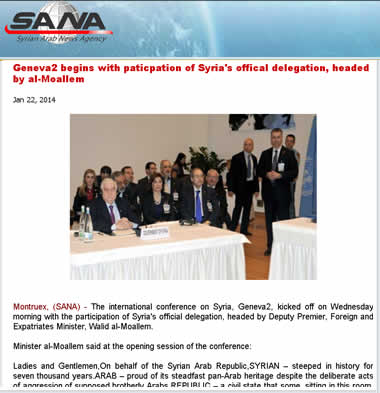 Montreux, (SANA) – The international conference on Syria, Geneva2, kicked off on Wednesday morning with the participation of Syria’s official delegation, headed by Deputy Premier, Foreign and Expatriates Minister, Walid al-Moallem.

Minister al-Moallem said at the opening session of the conference:

Ladies and Gentlemen,On behalf of the Syrian Arab Republic,SYRIAN – steeped in history for seven thousand years.ARAB – proud of its steadfast pan-Arab heritage despite the deliberate acts of aggression of supposed brotherly Arabs.REPUBLIC – a civil state that some, sitting in this room, have tried to return to medieval times.Never have I been in a more difficult position; my delegation and I carry the weight of three years of hardship endured by my fellow countrymen – the blood of our martyrs, the tears of our bereaved, the anguish of families waiting for news of a loved one – kidnapped or missing, the cries of our children whose tender fingers were the targets of mortar shelling into their classrooms, the hopes of an entire generation destroyed before their very eyes, the courage of mothers and fathers who have sent all their sons to defend our country, the heartbreak of families whose homes have been destroyed and are now displaced or refugees.

My delegation and I also carry the hope of a nation for the years to come – the right of every child to safely go to school again, the right of women to leave their homes without fear of being kidnapped, killed or raped; the dream of our youth to fulfill their vast potential; the return of security so that every man can leave his family safe in the knowledge that he will return.

Finally, today, the moment of truth; the truth that many have systematically tried to bury in a series of campaigns of misinformation, deception and fabrication leading to killing and terror. A truth that refused to be buried, a truth clear for all to see – the delegation of the Syrian Arab Republic representing the Syrian people, the government, the state, the Army and the President – Bashar al-Assad.


Continue Reading at SANA »
Posted by Admin at 3:00 PM