Two States, and Counting, Seeking to Ban Data-Sharing with NSA 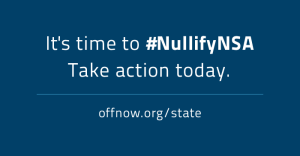 As federal judges and lawyers squabble over the constitutionality of NSA data gathering, state legislators in Kansas and Missouri have taken steps to thwart its practical effect and protect the privacy of citizens in their states.

Late last week, Rep. Brett Hildabrand (R-Shawnee) prefiled a bill that would ban all state agencies and local governments in the state from possessing data “held by a third-party in a system of record” and would prohibit any such information from being “subject to discovery, subpoena or other means of legal compulsion for its release to any person or entity or be admissible in evidence in any judicial or administrative proceeding” without either “express informed consent” or a warrant.

The Fourth Amendment Protection Act (HB2421) would effectively prohibit the use of information gathered by the NSA and shared with state or local agencies in Kansas.