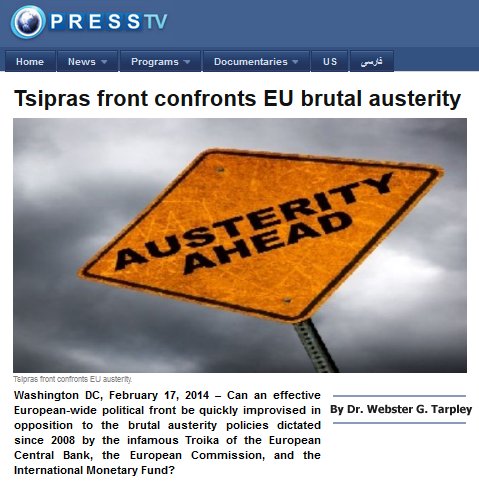 Can an effective European-wide political front be quickly improvised in opposition to the brutal austerity policies dictated since 2008 by the infamous Troika of the European Central Bank, the European Commission, and the International Monetary Fund?
This is the question which will be answered between now and May 22-25 in response to an effort led by Alexis Tsipras, who is also the candidate for prime minister of Greece put forward by the Syriza left party. Late last year, Tsipras was officially nominated as a candidate for the presidency of the Brussels European Commission by the European Left Party in the context of the upcoming elections for the European Parliament. During February, Tsipras has taken his campaign to the Netherlands, France, and Italy, with further appearances planned in Germany, the Czech Republic, Slovenia, Ireland, Great Britain, Sweden, Portugal, and Spain.

Thanks to this campaign by Tsipras, there is now new hope, after years of fragmentation and impotence, of assembling a coherent European-wide programmatic alternative to the three headed Cerberus of European austerity, deflation, and anti-worker measures.

As he steps onto the European stage, Tsipras’ authority is bolstered by the unique success of Syriza under his leadership in recent years. As of now, he is well on his way to becoming prime minister of Greece. In late November 2013, Syriza passed several percentage points ahead of the ruling New Democracy party of the current Greek Prime Minister Antonis Samaras, who had was installed in Athens by the Troika as its austerity enforcer. So far, this lead has held up.

Continue Reading Exclusively at PressTV »
Posted by Admin at 11:35 AM