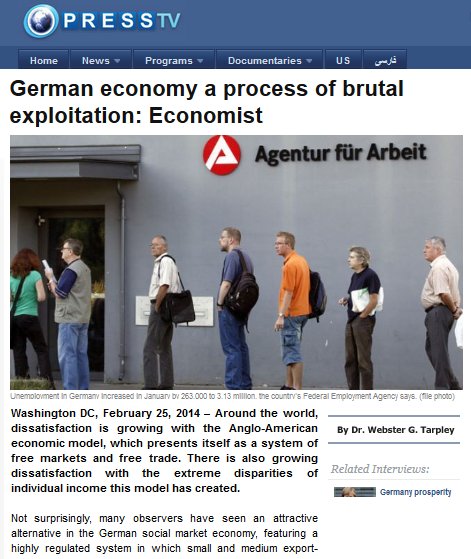 Washington DC, February 25, 2014 – Around the world, dissatisfaction is growing with the Anglo-American economic model, which presents itself as a system of free markets and free trade. There is also growing dissatisfaction with the extreme disparities of individual income this model has created.

Not surprisingly, many observers have seen an attractive alternative in the German social market economy, featuring a highly regulated system in which small and medium export-oriented companies are prominent, and in which trade unions play an integral part, both in factory councils and by placing representatives on corporate boards.


But a closer look at Germany reveals that the social market economy of earlier decades now includes a vast low-wage sector of workers who have become second-class citizens, receiving much the same status which undocumented Hispanic immigrants in the United States would occupy under plans put forward by the Republican Party and supported by many Democrats.  The German low-wage sub-economy has a name: it is called Hartz IV, named after the former personnel boss of the Volkswagen concern, and enacted into law under the auspices of the former Social Democratic Chancellor Gerhard Schröder -- with massive complicity from the neo-corporatist German trade unions -- and successively amended several times, thus accounting for the IV.  German working people have just completed their eleventh year under the yoke of Hartz, which came into full effect in January 2003, and has been expanded and perfected by Europe’s reigning austerity enforcer, Christian Democratic Chancellor Angela Merkel.

The various Hartz plans started as a response to the permanently high levels of unemployment which have prevailed in West Germany and then in reunified Germany, since the early 1980s. These high jobless levels are themselves a reflection of the slowing of world economic progress in the decade after the demolition of the highly successful 1944 Bretton Woods system, which was terminated by Nixon and Kissinger on August 15, 1971. During the 1980s and 1990s, Germany was afflicted by unemployment in the neighborhood of 3 million, 4 million, and then 5 million workers.