Impeach the State Department’s Hooligan Ban-Ki Moon, or Watch the UN Follow the Old League of Nations into Oblivion 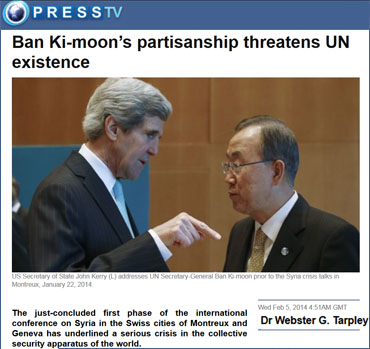 The just-concluded first phase of the international conference on Syria in the Swiss cities of Montreux and Geneva has underlined a serious crisis in the collective security apparatus of the world.
Because of his outrageous partisanship and animus against countries like Syria and Iran, United Nations Secretary-General Ban Ki-moon has manifestly lost the confidence of political circles the world over, and can no longer continue in office. Ban’s incompetent and partial management of Geneva II is unquestionably one of the main causes for the meager results of this diplomatic effort so far.
The role of the secretary general should be to maintain an attitude of impartiality with a view to using good offices to mediate conflicts in accordance with guidance from the Security Council. As the United Nations states on its website: “One of the most vital roles played by the Secretary-General is the use of his ‘good offices’ — steps taken publicly and in private, drawing upon his independence, impartiality and integrity, to prevent international disputes from arising, escalating or spreading.”

But to speak of “independence, impartiality and integrity” in the same sentence with the name of Ban has now become grotesque. Ban Ki-moon has always been a dubious figure on these points, but he has now crossed the line into partisanship and animus against two prominent anti-imperialist states.

The present writer issued a call for the Secretary-General’s impeachment in June 2012 because of Ban’s failing stewardship of the peace process for Syria, which was already obvious at that time. Ironically, Ban Ki-moon had momentarily re-appeared as a possible honest broker for the Syrian conflict when, on Sunday, January 19, he announced his decision to invite Iran along with a number of other countries to take part in the preliminary session scheduled for Montreux the following Wednesday.

It is not known what factors contributed to such a moment of lucidity on the part of Ban, but his reasonable conduct proved to be short-lived. First, the Syrian National Coalition, a group of NATO puppets inhabiting expensive hotels who represent precious little beside themselves, bombastically stated that they would not participate in any conference where Iran was present. The US State Department immediately began howling that Iran had to fulfill the precondition of endorsing the communiqué issued by the first Geneva conference on Syria, held in mid-2012. But here Foggy Bottom ran into a palpable contradiction, since Iran had been deliberately excluded from Geneva I — in large part because of US pressure. So now Iran was expected to endorse a communiqué issued by a conference from which it had been shut out. No matter; the State Department obviously did not want the Iranian presence and Ban Ki-moon was told to find a way to keep Tehran’s envoys out.

Ban Ki-moon claimed that he had received informal assurances from Iranian Foreign Minister Zarif that Iran accepted the general proposition that the Syrian parties should agree on a transitional governing body for the country. But now, Ban complained that public statements by Iranian officials had contradicted that undertaking. Using this crude pretext, Ban rescinded his invitation to Iran — a diplomatic affront of the first magnitude. Earlier Secretaries General of the United Nations had of course played favorites, but seldom had they done so in such a primitive and insulting manner as Ban.


Continue Reading Exclusively at PressTV »
Posted by Admin at 2:00 PM