Statement of Natalia Vitrenko of The Progressive Socialist Party of Ukraine 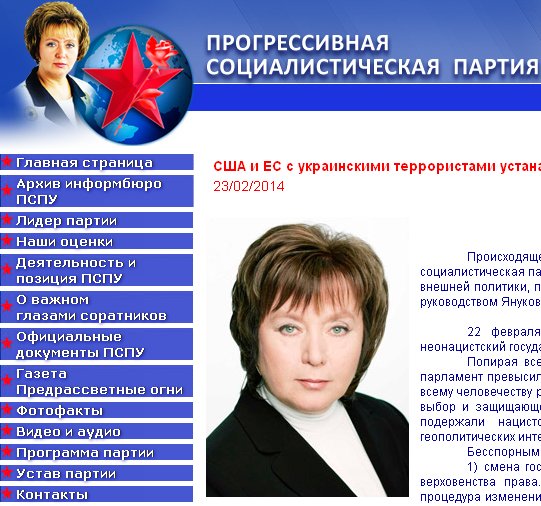 Events in Ukraine are exciting the whole world. We need to understand the essence of what is happening. The Progressive Socialist Party of Ukraine, as a party of the Left Opposition, which fought and is fighting against the course of the domestic and foreign policies pursued under the direction of the Orange destabilization and Yushchenko, and against the Alliance Party of Regions and the Communist Party led by Yanukovych, considers it necessary to give an assessment.

Violating all norms of the Constitution, international law, and trampling European values, Parliament exceeded its authority and committed criminal acts. Washington and Brussels — who told the world and all mankind that Euromaidan is a nonviolent action of the Ukrainian people, to make a European choice and protect democracy and European values — should now honestly admit that the Ukrainian people got nothing. They used a Nazi coup, carried out by the insurgents, terrorists and politicians of Euromaidan to serve the geopolitical interests of the West.

Indisputable evidence for that is: