RFID tags are so last season. Google Glass isn’t even as potentially invasive as the new tech that’s coming out now.

Between infinitesimally small cameras that allow you to take high definition 3-D “selfies” of your insides and electronic tattoos or pills that authenticate your body the way a password does, the future is turning out to be more than just a tad bit creepier than Back to the Future II said it would be.

The world is bad enough with vast swaths of disconnected people wandering through it like techno zombies, faces constantly down in their smart phones. It’s a lot like this: 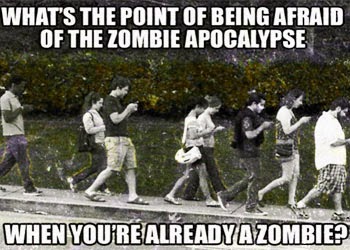 Go to dinner, half the tables are filled with people who aren’t spending nearly as much time with each other as they are with their smart phones.