Leaves of Mass (Destruction, That Is) - HUMOR! 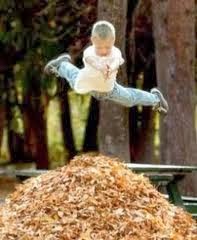 "Child Walks Across Street and Gets Hit By Leaf. Possible Terrorist Connection."


The White House announced early Friday morning, just in time for weekend cogitation, that a child by the name of Joseph Arbor was struck in the forehead by a falling leaf. Immediately, his mother suspected fowl play.

"I've been on Jihad watch for a dozen years, and I see terror everywhere. You could say I've a gift, " said his most perspicacious mom.

The child could not be reached for comment, because he was playing X-Box.

The media (including yours truly) has mobilized (but we got there first). We supplicated the great Jay Carney to jump on the bandwagon, and he made a statement almost immediately (he's so spontaneous!).

Carney said, "The terrorists are becoming more and more subtle. Heck, they can even hover on the tips of a leaf; which means you can never rest. Never. We're watching. And if you rest, we'll slip your hand into warm water."