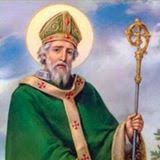 St Patrick stunned the world today by holding a press conference at the Washington Monument, which he declared, "A wake up call for revelers".

The glorious saint descended in a brilliant cloud a midst drunken party girls and their temporary fawning escorts. Although he did not strike them with divine lightning, his look of sadness nearly crushed their sense of hyper-inflated frivolity.

He immediately proceeded to the Monument, followed by a stupefied crowd of boozers, who were congregating (ostensibly) in his name. Eye witnesses report he did not so much walk as float, and that many had their eyes incinerated.

When he had taken up his impromptu position, he began to speak. "Brothers and sisters, I have come back amongst you to insist that you at least have the courage to name your festival after a real drunkard. Allow me to suggest Earnest Hemingway. He even has modern cache. I was not a teetotaler, but reveling? Not my thing, people."

He went on to explain that, "Green is not my color. So if you do keep the festival's name, please change it's color to red. Specifically, I prefer maroon. When I have the occasional pint in Heaven with the Lord, I usually wear either it, or a tasteful plaid tartan."