Metaphysical Doubts Concerning the Existence of Modern Ukraine, a 1918 Creation of the German General Staff

News reports on the reaction in Kiev to the reunification of the Crimean peninsula with Russia have included the idea that some Ukrainians resent the failure of the United States or the western European powers to intervene militarily against Russia in favor of the new Kiev fascist government. At the same time, it appears that Ukrainian military units have uniformly refused to fight for their borders, their bases, their headquarters, or other strategic assets under their control. Much of the Ukrainian army and navy located in the Crimea has chosen rather to become part of the Russian forces. Repeated attempts by the Yatsenyuk government in Kiev to call up reservists or otherwise to mobilize manpower for military purposes have met with a very meager response. 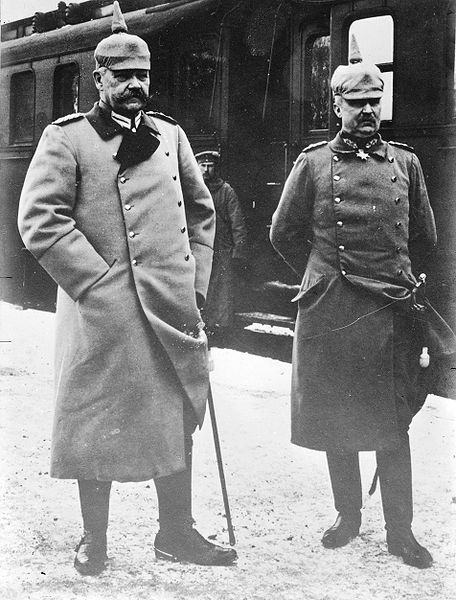 The founding fathers of modern Ukraine: Field Marshal Paul von Hindenburg (left) and General Erich Ludendorff (right), who ruled Germany in the name of the German General Staff in 1917-1918
What can we make of a country which refuses to fight for itself, and at the same time, expects foreign countries to pull its chestnuts out of the fire? The reasons may lie in the historical genesis of modern Ukraine, which is a nation called into being during World War I, not by a popular movement of its own people, but rather by the German military leadership, and then propped up in recent years by the United States and the European Union.
International attention has lately been much focused on Ukraine, but world publics know very little of the history involved. The country located on the Pontic step (the flatlands north of the Black Sea) currently calling itself Ukraine has only existed for 23 years, since the failure of the August 1991 KGB-inspired coup in Moscow. Before that, to find something that corresponds to modern Ukraine, we must go back to the Kievan Rus late in the first millennium of the Common Era. This was a state set up by Vikings (called Varangians) along the Dnieper River, which was the main inland waterway between Scandinavia in the north and the Byzantine Empire in the South. It was here that grand Duke Vladimir converted to Orthodox Christianity in the year 988, thus establishing a religious tradition which continues to be decisive in Russian history down to the present day. But Vladimir’s state did not call itself Ukraine, considering itself rather the leading state of Russia, which the Latin West sometimes called Ruthenia.

The Kiev Rus was conquered around the middle of the 1200s by the Mongols, and was thereafter ruled by a series of Mongol Khans. After the Mongol power north of the Black Sea had been shaken by the victory of the grand Duke of Moscow Dmitry Donskoi in the battle of Kulikovo on the Don in 1380, the Mongol yoke over the Kiev region began to fall away. By 1526, much of today’s Ukraine, including Kiev, was part of the very large Polish Republic, which stretched from the Baltic to near the Black Sea. Other parts of today’s Ukraine were under Moscow, while some — including the Crimea — had been incorporated into khanates of the Ottoman Empire, and a small corner had been taken by the emerging Austrian Habsburgs. Little of this had changed by the time of the peace of Westphalia in 1648. Emmanuel Bowen’s 1747 English map of Eastern Europe calls today’s Ukraine “Little Russia” (south of “White Russia,” today’s Byelorus) with “Red Russia” (south of the city of Lvov (Lwow in Polish, Lviv in Ukrainian, Lemberg in German, and Leopoli in Italian); only a very small area astride the Dnieper is labeled “Ukrain,” meaning something like “at the border.”