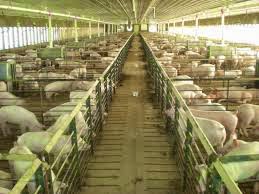 Pigs, aka swine, have played a prominent part in many philosophies, including literature [This little piggy went to market…]; in religion [Kashrut/Kosher (Jewish) and Halal (Muslim) dietary laws]; in health-medicine-vaccines [the infamous Swine flu (2009), trichinosis (a disease from eating undercooked infected pork), and vaccines (the pig virus, porcine circovirus type 1 PCV-1, found in GSK’s rotavirus vaccine Rotarix® [1]); and the commodities markets, specifically pork bellies, that traded until July 15, 2011 [2].

However, something probably unexpected is affecting pigs, those four-legged creatures, whose meats are butchered into bacon, pork chops, pork loin roasts, hams, barbequed ribs, Canadian bacon, and ham hocks, plus cooked products like scrapple, wieners, and sausages. According to Wall St Daily, there’s been a mass die off of pigs in the USA, totaling close to 2.7 million animals! [3]

The supposed culprit is “porcine epidemic diarrhea” that has been responsible for a reduction of 7 percent in pork production. That means higher food prices.

Interestingly, and perhaps, pig diarrhea may be a result of all the genetically modified corn and soy that are being fed to cattle and food-producing animals. According to the University of Florida,