Artificial Ukrainian State Heads for Breakup Despite US Hysterics, as Putin’s Actions Promise a More Stable Balance of Power System 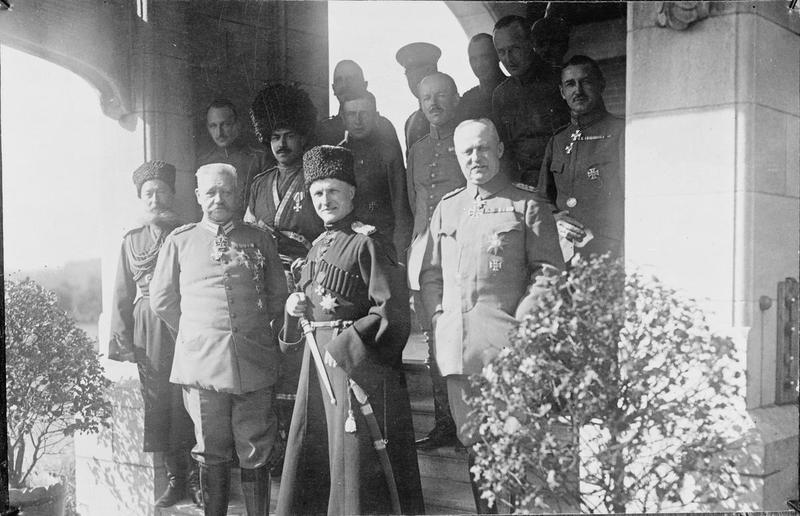 Webster Tarpley
PressTV
Current US and NATO propaganda is based on the idea that Russia under President V. V. Putin has been waging an aggressive campaign against Ukraine, but the reality is that Russia’s actions have largely been of a strategically defensive character, although also containing some aggressive tactics.
Ukraine’s puppet dictator Gen. Skoropadsky (center) confers with his masters Field Marshal von Hindenburg and General Ludendorff of the German Imperial General Staff at their headquarters at Spa, Belgium, September 9, 1918. Germany had created modern Ukraine earlier that same year as a source of food and a counterweight to Russia. (Photo courtesy of Theodore Geiser collection)
The main cause of the current conflict is the insistence by Washington and London on organizing a coup d’état in Russia’s largest and most strategically sensitive area.

Putin’s actions have been mainly focused on preventing the rise of a hostile fascist state allied to NATO on his own borders. Russia is merely trying to secure for itself an environment of reasonably benign neighbors, a program not unlike the traditional US Monroe Doctrine.


Twilight of the Color Revolutions

The initiative in starting the current crisis did not come from Putin, but rather from a complex of US and NATO institutions dedicated to meddling in the internal affairs of other countries, and to destabilizing other states in ways that the bungling Utopians of the State Department imagine will be helpful to them.

The forces behind the mob-rule destabilization of Ukraine in the fall of 2013 and the Kiev putsch of February 22, 2014 are centered in the National Endowment for Democracy, and in the politicized subdivisions of the US Agency for International Development, not to mention such private sector conduits as Freedom House, the Albert Einstein Foundation, and many more.

These are the agencies which, according to US Assistant Secretary of State Victoria Nuland (the wife of neocon warmonger and top Romney advisor Robert Kagan), have invested some $5 billion in building up an anti-Russian opposition in Ukraine – an opposition in which neofascist and neo-Nazi political forces are heavily represented.