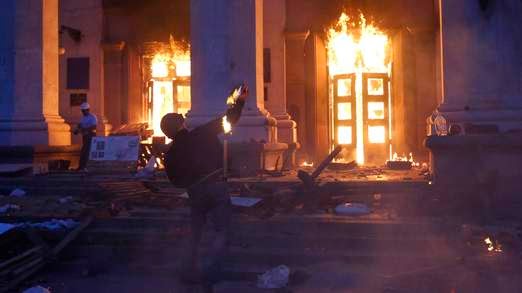 May 5, 2014
Tony Cartalucci
New Eastern Outlook
After the brutal massacre of over 40 anti-regime protesters in the southern port city of Odessa - most of whom were burned to death after being trapped within the city's Trade Unions House - the Western narrative of "Russian aggression" driving the current unrest in Ukraine is ringing particularly hollow.

Unable to spin the massacre carried out by the very ultra-right Neo-Nazi mobs that propelled the current unelected regime into power, both the West's media machine and its politicians have attempted to remain as ambiguous as possible regarding the recent brutality resulting from what Kiev calls "anti-terror" operations.
The US condemned the violence in Odessa, but failed to identify the provocateurs or assign blame and instead called for an "investigation" into the deaths - the diplomatic equivalent of shrugging one's shoulders. This response comes in sharp contrast to the West's politically motivated responses to alleged government-sanctioned violence elsewhere in the world, most notably in Libya in 2011, and currently in Syria.
Additionally, as evidence emerges regarding the details of the Odessa massacre, only Russian news sources are covering it, while the West neither confirms nor denies reports, but rather misinforms its audiences through lies of omission. A particularly damning RT report titled, "Radicals shooting at people in Odessa’s burning building caught on tape," stated:

New video has emerged online which shows a man shooting at the windows of Odessa’s burning House of Trade Unions. At least 39 anti-government activists died in the flames on May 2 in the building besieged and set ablaze by radicals.

A man in the video is wearing a bulletproof vest and is shooting several times in the direction of the burning House of Trade Unions.

The article would also report that: