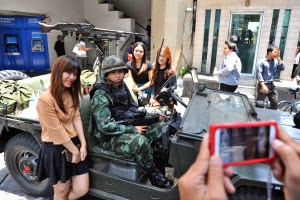 European Union foreign ministers on Monday condemned the military takeover in Thailand and agreed punitive measures to back up calls for an urgent return to democratic rule.It also claimed:

The ministers halted all official visits to Thailand and suspended the signing of a partnership and cooperation accord with Bangkok, a statement said.

Expressing “extreme concern” at developments, ministers said the military should restore “as a matter of urgency, the legitimate democratic process and the Constitution, through credible and inclusive elections.”

They should also free all political detainees and respect human rights and freedoms, it said, adding that EU member states will review their military ties with Thailand.An “urgent return to democratic rule,” however is impossible, because there was never any “democratic rule” to begin with. In fact, this was one of the many issues that provoked the military coup in late May 2014 in the first place. The EU’s calls for respecting “human rights and freedoms,” is also suspiciously hypocritical, as similar calls were absent in the weeks and months leading up to the coup, when the now ousted regime of Thaksin Shinawatra was carrying out a nation-wide terror campaign against his political opponents that left over 20 people dead and hundreds maimed.