Elections Pushed Ahead in Ukraine, Obstructed in Syria, So Mass Murder Can Continue - the West's Weaponization of Democracy 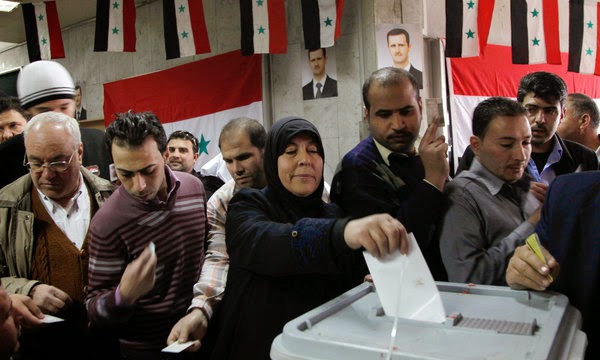 May 28, 2014 (Tony Cartalucci - NEO) - Early polls began for Syria's presidential election, as the country begins turning the tide against foreign-backed terrorists and restoring order throughout much of the country. It was impossible for the Western media to cover up tens of thousands of Syrians around the world queuing up in impressive numbers to cast their votes in support of both President Bashar al-Assad and other candidates participating in the election. Despite eagerness to vote, the US, UK, EU, and others have decided to condemn the elections and even go as far as obstructing overseas polling.

In Reuters' article, "Tens of thousands of Syrians abroad vote in early poll," it reported:


Expatriates and those who have fled the war were casting their ballots at dozens of Syrian embassies abroad ahead of next week's vote inside the country that opponents have dismissed as a farce as the fighting rages in its fourth year.

Several countries that oppose Assad, including France, have blocked the voting but Syrian government media said people were still able to participate in many countries.

Reuters would continue with anecdotal, unsubstantiated reports to undermine the legitimacy of the elections before reporting:

The European Union has said holding an election "in the midst of conflict, only in regime-controlled areas and with millions of Syrians displaced from their homes would be a parody of democracy, have no credibility whatsoever, and undermine efforts to reach a political solution".

"Holding elections in the midst of conflict, only in regime-controlled areas"  being a "parody of democracy" and therefore having "no credibility whatsoever" might have been a credible assessment by the European Union if it hadn't just fully endorsed as credible, elections in Ukraine held under precisely the same conditions. Indeed, the EU along with the US and rest of NATO, hailed recent elections in Ukraine as a success and immediately recognized pro-Western billionaire oligarch Petro Poroshenko as the new "president" of Ukraine.

Continue Reading this Article »
Posted by Admin at 10:00 AM