US Seeks Occupation as US Fighters Flood Syria 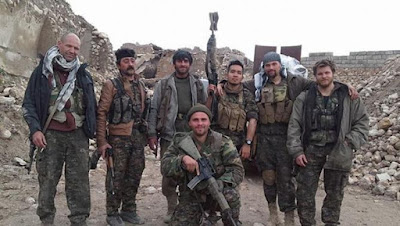 US policy paper called for the occupation of northern Syria with special operations forces. Now Foreign Policy reports northern Syria is being flooded by "volunteers" from America.

US corporate-funded policy think-tank, the Brookings Institution, published a June 2015 paper titled, "Deconstructing Syria: Towards a regionalized strategy for a confederal country." The signed and dated open-conspiracy to divide, destroy, invade, then incrementally occupy Syria using no-fly-zones and both US and British special forces is now demonstrably underway.


The paper would lay out in no uncertain terms that (emphasis added):


The idea would be to help moderate elements establish reliable safe zones within Syria once they were able. American, as well as Saudi and Turkish and British and Jordanian and other Arab forces would act in support, not only from the air but eventually on the ground via the presence of special forces as well. The approach would benefit from Syria’s open desert terrain which could allow creation of buffer zones that could be monitored for possible signs of enemy attack through a combination of technologies, patrols, and other methods that outside special forces could help Syrian local fighters set up.

Were Assad foolish enough to challenge these zones, even if he somehow forced the withdrawal of the outside special forces, he would be likely to lose his air power in ensuing retaliatory strikes by outside forces, depriving his military of one of its few advantages over ISIL. Thus, he would be unlikely to do this.

Not only does Brookings lay out an open conspiracy to invade and occupy Syria, it does so with the open admission that the goal is not to degrade the fighting capacity of the so-called "Islamic State" (ISIS or ISIL), but rather to undermine and eventually overthrow the Syrian government. In fact, Brookings makes a point of stating that the goal would be to seize and hold Syrian territory to further advance American ambitions toward regime change, and would move quickly to degrade the Syrian government's ability to resist ISIS if any attempts were made by Damascus to stop the US invasion.


Continue Reading this Article »
Posted by Admin at 10:50 AM